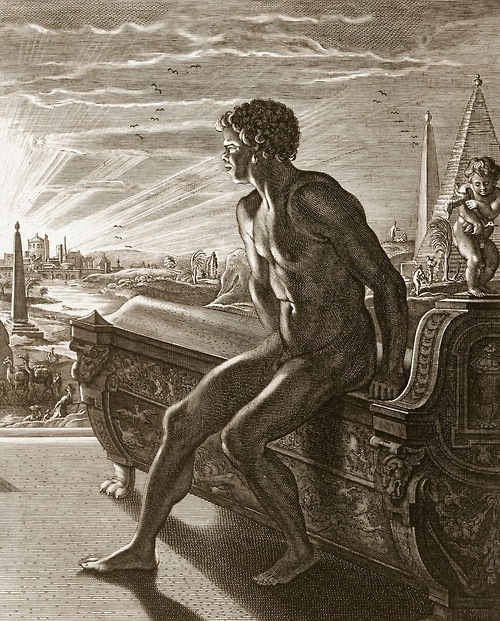 Dutch Art: Mythology and the Aethiopes or Ethiopians by Esther Schruder, Art Historian and Curator:

Although Biblical stories and mythological scenes are classified as history paintings, their content has a different import. Eroticism generally plays a major role in the representation of mythological stories which also offer greater opportunity for allusion and double entendre.

The mythological tales depicted in art during the sixteenth and seventeenth century derived from the classics, the works written by ancient Greeks and Romans, who called all black Africans Aethiopes, or Ethiopians. These classical authors, who were much read by artists in the Netherlands, accorded several Ethiopians a role in their stories.

The beautiful Andromeda, for example, nearly always portrayed as white, was actually Ethiopian in origin.

The Greek poet Homer (c. 800 – c. 750 BC) endowed the Ethiopians with a fabulous, almost supernatural status: he wrote that they came from the East, the land of the sun, were guiltless and fought under their king Memnon on the side of the Trojans in the Trojan War.

Almost certainly Homer did not know the exact location of Ethiopia.The Roman writer Pliny the Elder (AD 23 – 79) was also interested in the Ethiopians whom he described as a handsome race, the tallest people known, with skin burned by the sun and frizzy hair. He believed that Ethiopia lay in Nubia.

Later generations were better able to locate the country.

During the lifetime of the Greek writer Heliodorus of Emesa (third century AD) there was lively contact between the Greeks and Romans and ancient Ethiopia, which was also known as Aksum. Heliodorus was partly inspired by these relations to write a romantic tale he called Aethiopica, featuring a black Ethiopian royal couple, a white Andromeda and a white Ethiopian princess. The book was rediscovered centuries later and translated into French in 1547. In 1610 this was followed by a Dutch translation entitled De Moorenlandtsche gheschiedenissen, which enjoyed great, but brief, popularity.

Gerbrand Adriansz Bredero (1585 –1618) wrote a poem in praise of the book and school master David Beck (1594 –1634) noted in his journal, Spiegel van mijn leven, from 1624, that he was reading De Moorenlandtsche gheschiedenissen. Thus the classics formed a source of inspiration for sixteenth and seventeenth-century artists, some of whom included black Ethiopians in their images.

Just work harder!
👩🏽‍💻👩🏽‍💻👩🏽‍💻L'UNICA CRISI PERICOLOSA.... precetti per ogni CEO/MANAGER/IMPRENDITORE che si rispetti!!!👩🏽‍💻👩🏽‍💻👩🏽‍💻
Freedom is not something that anybody can be given. Freedom is something people take, and people are as free as they want to be.
#inspiration #quotes #motivationalquotes #selflove #quotesoftheday
It would be an endless task to trace the variety of meannesses, cares, and sorrows, into which women are plunged by the prevailing opinion that they were created rather to feel than reason, and that all the power they obtain, must be obtained by their charms and weakness.
#quotes #tbf #motivation #apologize #metisse #selflove