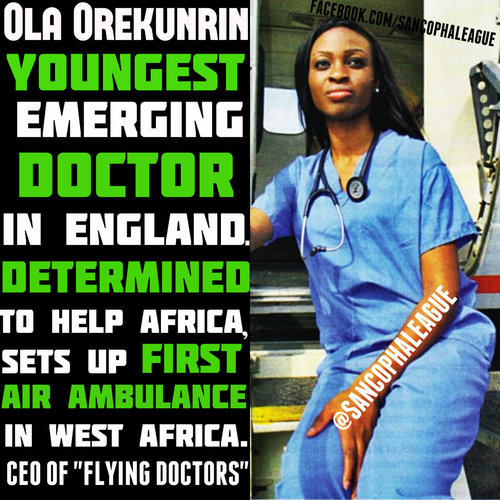 "Ola Orekunrin was studying to become a doctor in the UK a few years ago when her younger sister fell seriously ill while traveling in Nigeria. The 12-year-old girl, who’d gone to the West African country on holiday with relatives, needed urgent care but the nearest hospital couldn’t deal with her condition.

Orekunrin and her family immediately began looking for an air ambulance service to rapidly transport the girl, a sickle cell anemia sufferer, to a more suitable healthcare facility. They searched all across West Africa but were stunned to find out there was none in the whole region.

"The nearest one at the time was in South Africa," remembers Orekunrin. "They had a 12-hour activation time so by the time they were ready to activate, my sister was dead." (Cnn.com)

Orekunrin did the latter. Motivated by the tragic death of her sister, the young doctor decided to leave behind a high-flying job in the UK to take to the Nigerian skies and address the vital issue of urgent healthcare in Africa’s most populous country.

At 27, there isn’t much Orekunrin hasn’t achieved.

She is England’s Youngest Doctor.

Born in London, she grew up in a foster home in the charming seaside town of Lowestoft in the south-east of England.

Aged 21, Orekunrin had already graduated from the University of York as a qualified doctor. She was then awarded the MEXT Japanese Government Scholarship and moved to Japan to conduct research in the field of regenerative medicine.

After moving back to Europe the young doctor looked set for a promising career in medicine in the UK. But her desire to improve healthcare services in West Africa brought her back to her roots.

Orekunrin quit her job, sold her assets and went on to study evacuation models and air ambulance services in other developing countries before launching her ambitious venture, which enables her to combine her “deep love for medicine and Africa” with her growing passion for flying — Orekunrin is also a also a trainee helicopter pilot.”