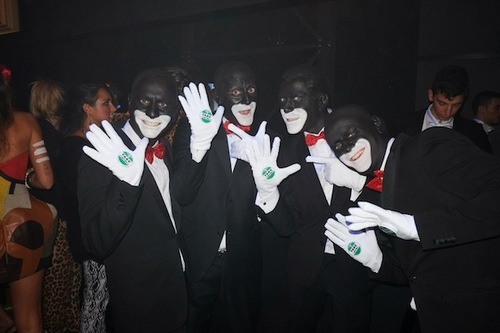 "Disco Africa , Hallowood 2013 Party Hosted by Giampaolo Sgura . Thank you for what made us all so beautiful, the all guests were irresistible and very originals and very nice prepared in mood with Thank you very much for the great Party last night !"

This is what you can read on Zhanna Romashka’s blog.http://onlystylishpeople.blogspot.it/

The fête was documented by Russian photographer Zhanna Romashka who put a slew of party pictures on her blog OnlyStylishPeople.it.

Some reviewrs say blackface is antiquated, has been deemed controversial across the board, and is racially insensitive. It is steeped in a negative history, pointing back to a time in American history when blacks were considered 3/5th of a human being–unfit to represent themselves, so white actors took the lead (at first), painting their skin brown and propagating some of the most pernicious and dehumanizing stereotypes of black people at the time (minstrel shows characterized blacks as lazy, superstitious, and buffoonish).

Do fashionable Italians live in a bubble? It would seem so, believe others. The enduring message, they stated is: this is not ok!

And again: "this whole party was full of people in blackface shows a startling predomination of ignorance, abetted by fashion designers and insiders we admire. We are not moving forward people, we are moving backwards".

Do you all agree with these points of view?

Here Dell’Acqua is, posing below with Stefano Gabbana and Juan Fran

A black man was actually at this party, and got into costume along with everyone else