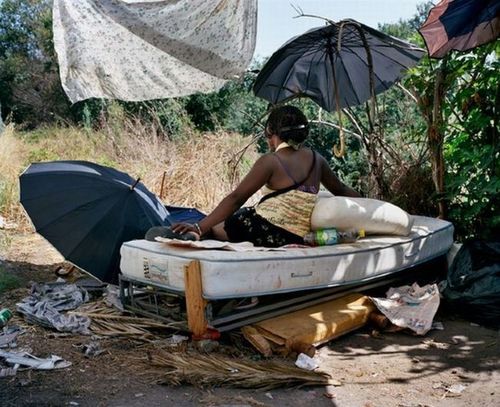 This is not a paranormal story but is just bizarre and scary as the ghost stories are. Italy is an European country, part of European Union, and to most it’s a promising one. Italy has water borders as well as land ones. People are Illegally trying to cross the boarder and get there. There are always “helping” people which will get you there for couple of hundreds of dollars. Nigerian women get lured there with a promise of a better future. Since women are not able to pay off the amount to the smuggler, they end up like a prostitutes in Italy. They are trafficked prostitutes, selling sex for as little as €10 a time so that they might pay off enormous debts owed to their smugglers.

If you are to drive through Italy, along a road you will see many of these women, almost all African, standing by the curb. It is estimated there are about 10, 000 to 20, 000 Nigerian women working in Italy. They are being forced under the name of Juju to do these things too. The women and girls are often forced to undergo a Juju oath-swearing ritual that commits them to repaying the money they owe to their smugglers on pain of death or insanity. And this is how they end up as you see them on these photos. This looks scary even for the poor countries. wonder what Italian government has to say about this. It looks like they are not traveling these roads.

Juju or black magic used to be very potent in Nigeria especially in the 70s and 80s. Juju comes from the traditional African religion popularly known as voodoo. Juju practitioners in the traditional African religion are extremists just like the terrorists in Islam although their modes of operation are quite different. The terrorists in Islam attack physically while in Juju the mode of operation is spiritually. Juju includes blood money and spiritual attacks. They are stealing their identity. This is serious stuff if you are a believer, and these girls are. They are raised with this and are to do anything in order to prevent bad things to happen, not realizing that they are already in hell.

How Juju works? Witchcraft steals, kills and destroys, and takes the spirit out of the body of the witch. Cults feed on witchcraft. Characteristics of witches: like blood, operate as dogs, are proud and like to curse. Activities of witches: murder the innocent, use false humility and abominable filth, have bloody covens, coordinate lies and robberies, pursue in the spiritual realm with witchcraft lancing, use prostitution to sell families and nations, are cannibalistic, ensnare, and operate as unclean birds and beasts. This sounds like hell and I am sure in this surrounding you will get scared and never talk about what happened. This women have no choice, once caught in this you will not get out easy.