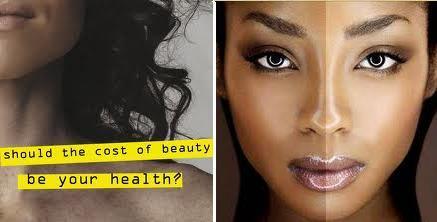 I could write an essay about my feelings towards skin bleaching, and why it saddens me. I know girls my age who started bleaching their skin in high school (for those of you who know me personally, you know who I am talking about).

Tragic in the sense that, well okay so ‘lighter is better’? Because in some way I suppose there is a desire amongst black people to ‘become white’, commingled with a sense of lack of self-worth. Ridiculous because it never does look ‘natural’, and often times the results look, well, just off and noticeably so.

I know there are arguments to the effect that people of other races tan their skin to become darker. Which is true, we are all vain and self-indulgent to some extent. But in the case of tanning, although if done excessively is likewise harmful, there is no permanency in the procedure. Once you bleach your skin, you can’t undo it. Not to mention that clinical testing so far is not conclusive, and nobody knows what the exact effect of using skin lightening/bleaching agents which restrict the production of melanin are. There is however evidence that these products for example Ambi, containing chemical agents such as hydroquinone have been found to have harmful effects including cancer-causing properties and:

‘…medical condition known as ochronosis in which the skin becomes dark and thick.

Dome-shaped yellowish spots and grayish-brown spots also are observed in ochronosis among black women and men in South Africa, Britain, and the U.S. Ochronosis has been observed in conjunction with hydroquinone use even in persons who have used hydroquinone-containing cosmetics for a short time. Some studies also report abnormal function of the adrenal glands and high levels of mercury in people who have used hydroquinone-containing cosmetics. For these reasons, hydroquinone has already been banned in Japan, the European Union, and Australia.’ (Source: http://www.medicinenet.com/script/main/art.asp?articlekey=64167)

What I really would like to do is have a conversation with someone who has bleached their skin, just to understand why.

Is it because we are told that being dark is bad. By whom? By colonialism and its ugly effects on our psyche as Africans, manifesting itself in a personal experience when I was once asked by a boy (who is darker skinned than myself); ‘Why I did not have lighter skin and thus more attractive’ like my mother (who is fairly light skinned). I laughed and I have never spoken to him since. But I understand for others, its comments and thinking like that which spur women to want to alter themselves. To satisfy chauvinists and to become more attractive than other (darker skinned) women.

What I would like to say to anyone reading this is, honestly there are OTHER ways for you to change the way your skin looks. Why not eat healthier, drink more water and generally take better care of yourself. Rather than send yourself to an early grave after contracting skin cancer. Especially for young people, whose skin is still developing.

More importantly, you should be striving to be comfortable in your own skin. You are young and beautiful, and anyone who tried to tell you any different should quite simply Fuck Off. Seriously. Be proud of who you are, whatever complexion you were born with.

You were always beautiful.